Happy Publication Day to the fourth book in Megan Tayte’s gripping The Ceruleans series, Devil and the Deep!

To celebrate Devil and the Deep‘s release, you have the chance to get your hands on a bunch of The Ceruleans and bookish goodies include an awesome folly tote bag, an Amazon gift card and much more!

Keep reading to find out how to be in with a chance of winning!

STORM CLOUDS ARE GATHERING, AND THEY WILL RAIN BLOOD.

Scarlett is living her happy-ever-after, back in the real world. Only the ‘happy’ part is proving problematic.

For starters, there’s the isolation. Being a Cerulean among humans is fraught with risk, so her time with people can only be fleeting. Which means being with Luke but not ‘being’ with Luke.

Then there’s her Cerulean light, her power over life and death. Less awesome talent, as it turns out, and more overwhelming responsibility. And it comes with rules – rules that are increasingly difficult to obey.

But what’s really pushing Scarlett to the precipice is something much bigger than herself, than her life in the cove. A force to be reckoned with: Blood.

When long-buried truths are exposed, will Scarlett keep her head above water – or will she drown in the blood-dimmed tide that is unleashed? 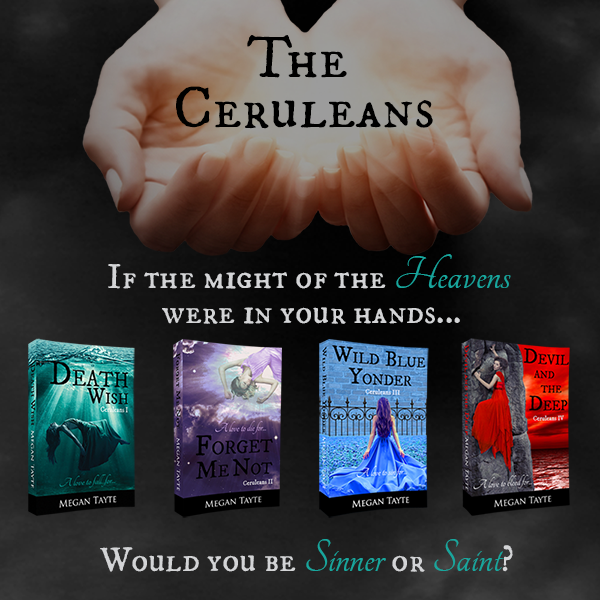 I can honestly say that The Ceruleans is one of my favourite paranormal romance book series and if you haven’t already, I highly suggest delving into these books. You won’t regret it.

The Ceruleans is a YA paranormal romance series set in a world where angels walk among us. The Ceruleans don’t think of themselves as angels, though – just ordinary people who happen to have a most extraordinary gift. And certainly few of them behave like angels. Because as it turns out, humans don’t handle well the reality of playing god…

My reviews for the previous installments in the series can be found here.

Devil and the Deep is available to buy here. If you’re a fan of a good bargain, head on over to Amazon right this second to take advantage of today’s free promotion on the other three books in the series; Death Wish, Forget Me Not and Wild Blue Yonder.

If you’d like to be in a chance of winning some The Ceruleans treats that are bound to make any brighten any bookworm’s day, then simply follow the instructions on the widget below. Best of luck!

Be sure to pick yourself up a copy of Devil and the Deep today!

My Problem with FOX's 'Scream Queens'