Sometimes I get concerned that this blog makes me seem marginally cooler than I am. This is one of those times.

Variations of “How the hell did you manage to get to go to the Moët launch?” flooded my inbox, and the truth is, I am none the wiser myself. Neither me, nor Emily, are sure how our weekend plans went from ‘Let’s do high tea!’ to ‘Let’s do high tea and party on a rooftop!’, but I’m sure it was a decision that had Natwest quaking.

Days were spent meticulously planning outfits and gearing up to celebrate summer in the most boujee of ways. 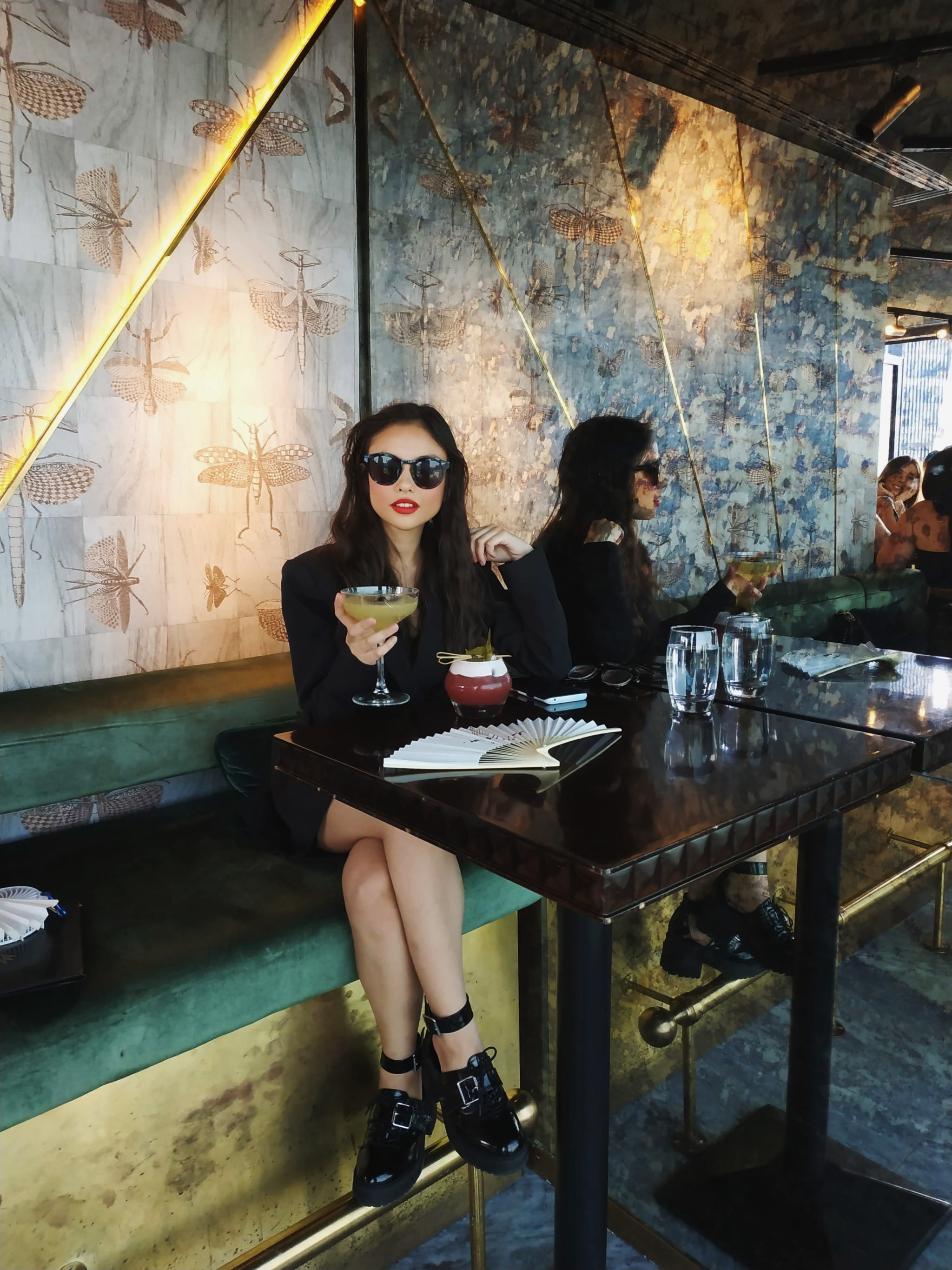 Naturally, we arrived fashionably late because well, we slept in. So, sporting yesterday’s curls and in my case, a dress that definitely didn’t account for the abnormal 32°C heat of London, we hopped off the tube at Aldgate.

The launch was held at Jin Bo Law, a rooftop bar on the Dorsett City Hotel’s fourteenth floor, which is situated right next to the tube station. Much like everyone I encountered, you’ll likely be wondering if I was boiling in my blazer dress. The short answer is yes. Yes, I was. However, one must suffer for fashion. Dorsett City & Jin Bo Law’s staff were kind enough to provide us with hand fans that not only served as a terrific little souvenir of the time Emily and I roasted on a rooftop, but they were also conscientious enough to print the prices of Moët & Chandon’s range to remind us just how much we wouldn’t be spending once we’d guzzled our way through the complimentary stuff. £1000 champers, anyone?

we love our fans x 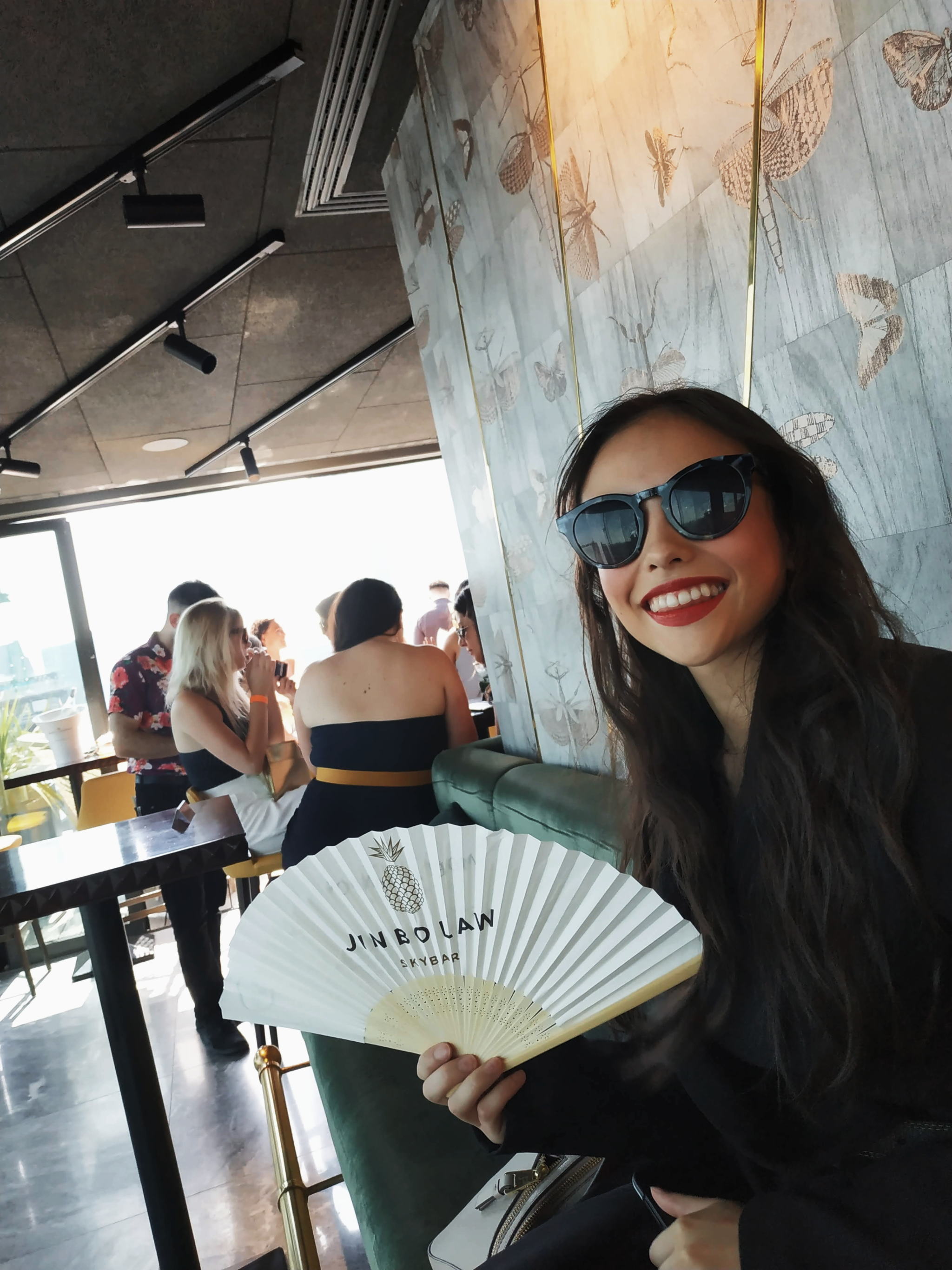 So, what did the launch entail? Well, other than dying in the heat, there were lunch time canapes, a lot of boozing and a sunset fire performance. Not a bad 12 hour summer soirée if I do say so myself.

I’d never been to Jin Bo Law before, but it had been on my bucket list because honestly, look at those views! It’s quite a modest rooftop bar in size, but it has insanely pretty decor that makes up for it. Obviously, they have an outdoor terrace that offers views of Tower Bridge, the Shard, the Walkie Talkie and the Gherkin, but be prepared to have to fight to get that gram as it can get quite packed especially during events.

Inside is where Emily and I did most of our sheltering from the sun, having dumped our life’s possessions on the table in order to save it from other prowling patrons when we disappeared to the bar or to have a dance. The interior is compromised of a largely black and yellow colour scheme. A giant golden pineapple adorns the ceiling, there’s sleek dark marble flooring, and Asian inspired iconography is dotted around here and there.

Alas, I did not get any snaps of the champagne pyramid. I know, I’m a terrible blogger! But it was thirty-something degrees and I was rocking head-to-toe black, so please partially forgive me for wanting to laze at our table and sip alcohol instead of working my way through the Moët crowd to photograph alcohol.

Also, shout-out to Emily, who if you’re not following by now (why not?!), for being the ultimate MVP that day. I’m sure you can see it lurking in a few photos, but the portable fan that she brought along with us was a saving grace! Being fancy af on the hottest day of the year is sweaty work and the breeze that tiny fan emitted was just sheer heaven.

Of course, we couldn’t go all the way to Jin Bo Law and not sample their own cocktail menu. The bar boasts quite a short, but intriguing menu. Alongside cocktails, there’s a choice of classic or Asian spirits, champagne, a decent wine list and two mocktails for the non-alcoholic types.

Fruity signature cocktails aplenty, I opted for the Eye of the Buddha (Bacardi Rum, Choya yuzu, kalamansi juice, simple Syrup and Prosecco) while Emily went for Cherry the moment (Bombay infused with kaffir lime leaves, Fair Goji liquor, kalamansi juice and cherry juice). Quite a few of their drinks offer an Asian twist which being two Asians, we lapped up. 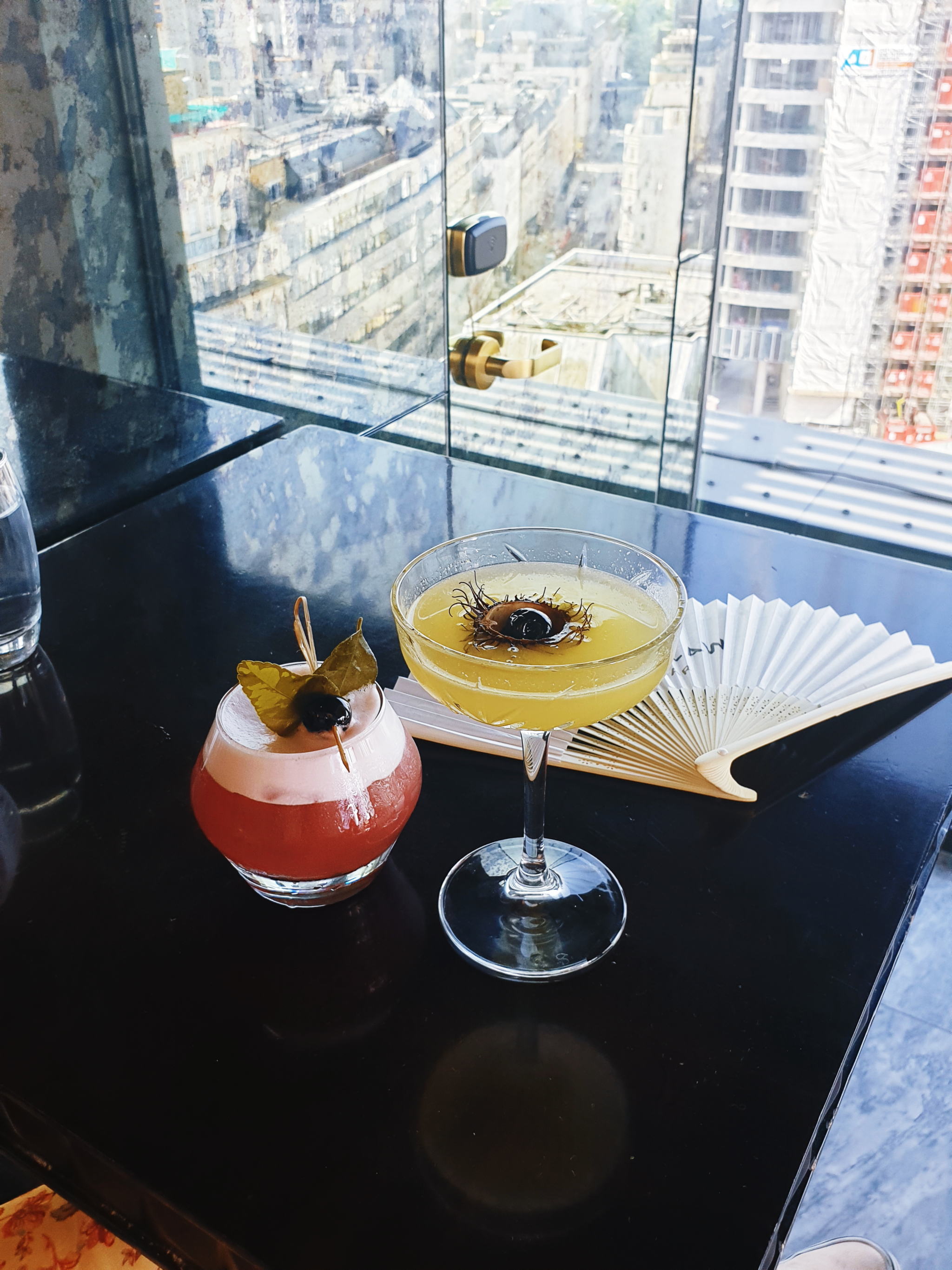 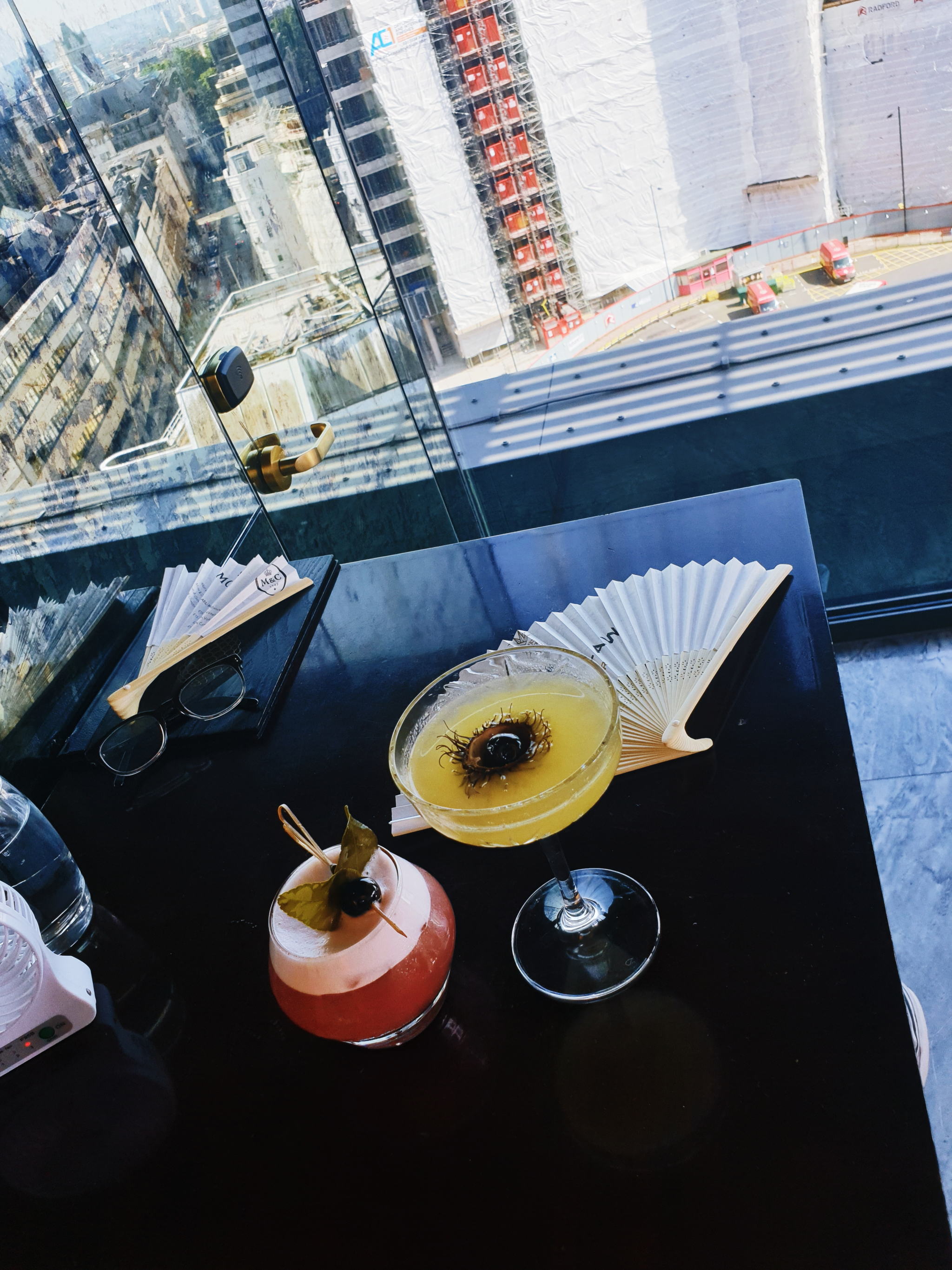 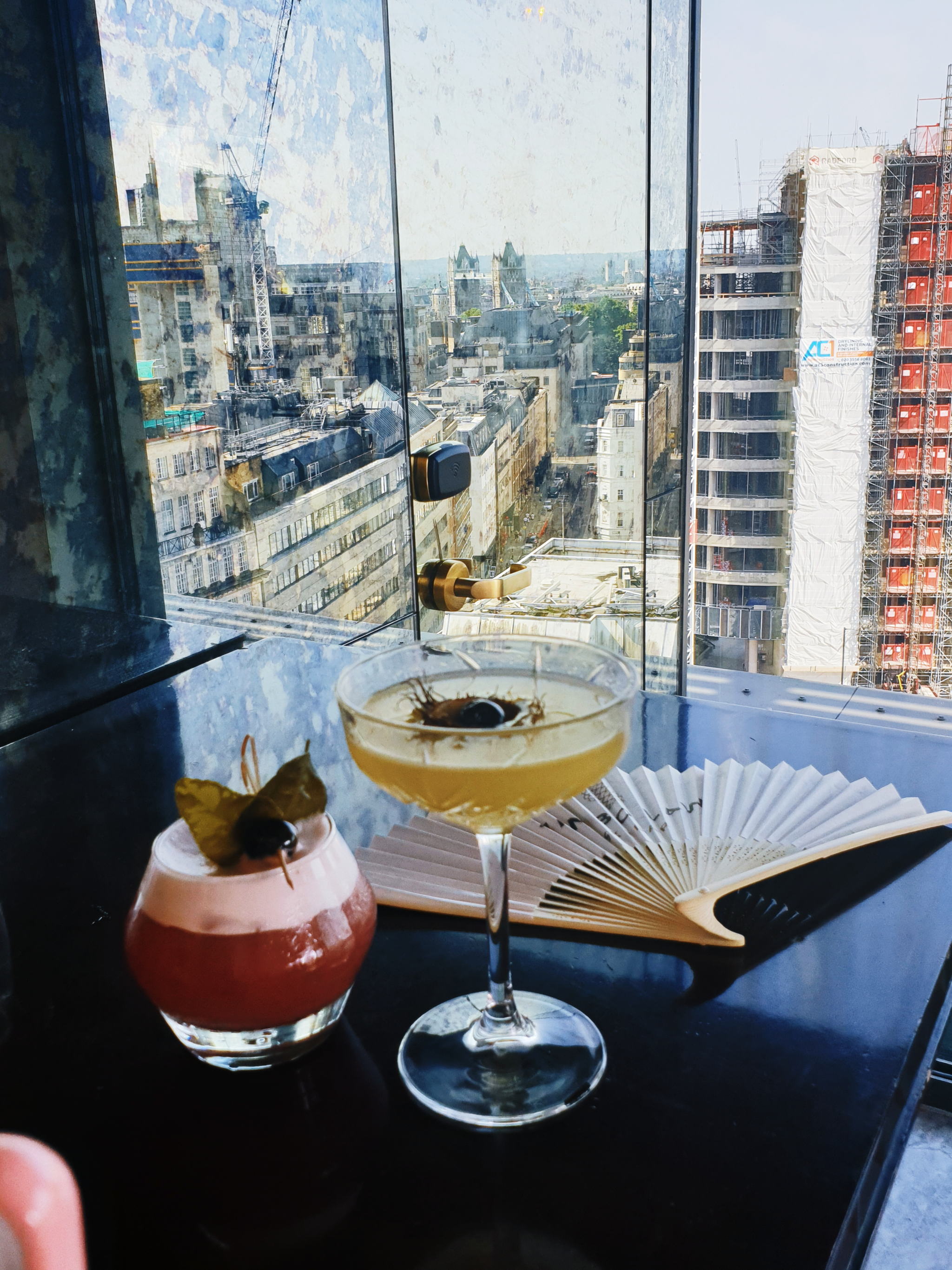 I really couldn’t think of a better end to June or to spend a Saturday, than living your best life by sipping champagne in the sun overlooking Tower Bridge. Big thank you to Moët & Chandon for letting us party and usher in the summer season with them while also simultaneously letting Emily and I live out our boujee heiress dreams!

The party didn’t stop there for us as we, naturally, rounded the day with a Maccies feast, even more cocktails and added bubbles.

That being said, the atmosphere at Jin Bo Law was terrific and the cocktails were of that deliciously dangerous level where they’re fruity so you can easily down them, but they’re also boozy af so you’ll end up way more than tipsy after a few. Wouldn’t prefer my alcohol any other way!

Also, I promise the delightful Asian side of my family that I am not the alcoholic that this weekend would make me appear to be. I attest that the abundance of champagne flute shots over the course of 48 hours would seem so, but I spent the Sunday with a migraine, renouncing alcohol and atoning for my Long Island Ice Tea and Espresso Martini sins. Ok, so I was back on the booze the next day too… but it’s summer!

Once again, thank you Moët & Chandon and Jin Bo Law for having us! And if you’re not doing so already, give Em a follow and book her for a shoot please and thanks.

Book Review: Everything I Know About Love