Book Review: Love on the Brain

Like an avenging, purple-haired Jedi bringing balance to the mansplained universe, Bee Königswasser lives by a simple code: What would Marie Curie do? If NASA offered her the lead on a neuroengineering project–a literal dream come true after years scraping by on the crumbs of academia–Marie would accept without hesitation. Duh. But the mother of modern physics never had to co-lead with Levi Ward.

Sure, Levi is attractive in a tall, dark, and piercing-eyes kind of way. And sure, he caught her in his powerfully corded arms like a romance novel hero when she accidentally damseled in distress on her first day in the lab. But Levi made his feelings toward Bee very clear in grad school–archenemies work best employed in their own galaxies far, far away.

Now, her equipment is missing, the staff is ignoring her, and Bee finds her floundering career in somewhat of a pickle. Perhaps it’s her occipital cortex playing tricks on her, but Bee could swear she can see Levi softening into an ally, backing her plays, seconding her ideas…devouring her with those eyes. And the possibilities have all her neurons firing. But when it comes time to actually make a move and put her heart on the line, there’s only one question that matters: What will Bee Königswasser do? 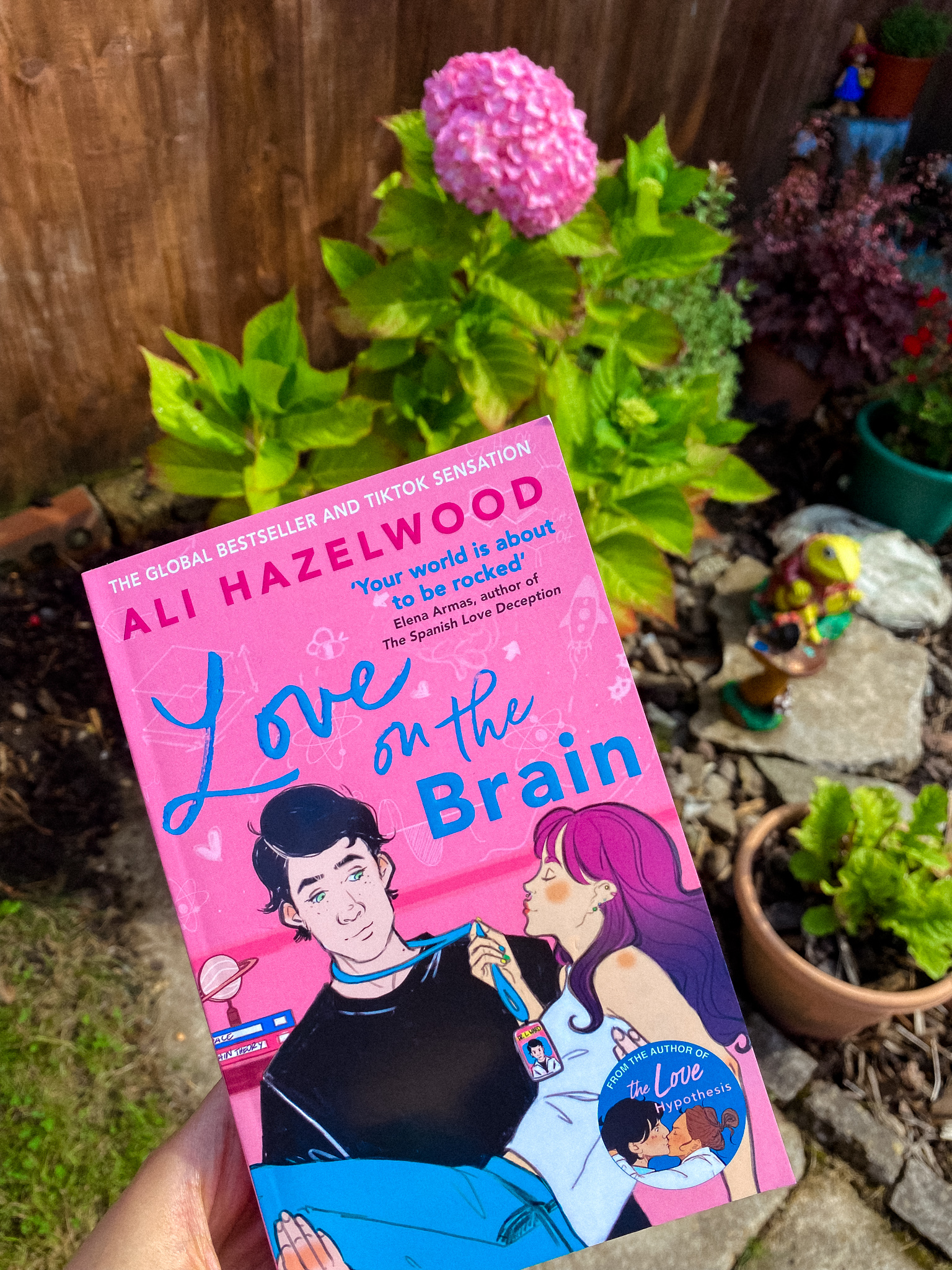 “THE REAL VILLAIN IS LOVE: AN UNSTABLE ISOTOPE, CONSTANTLY UNDERGOING SPONTANEOUS NUCLEAR DECAY. AND IT WILL FOREVER GO UNPUNISHED.”

I would like to detract my previous statement heralding Ali Hazelwood as the saviour of the romcom genre. It’s true that I absolutely LOVED The Love Hypothesis and still believe it’s one of the best romcoms in recent years. However, Hazelwood’s sophomore STEMinist romance novel, Love on the Brain, is… not it.

Love on the Brain follows the same formula as The Love Hypothesis; grumpy meets sunshine scientists who find themselves forced to suffer each others’ company. Yet, unlike Adam and Olive, Levi and Bee were really stale. Maybe I’m biased because Adam of The Love Hypothesis really bodied AU!Kylo Ren and while Levi is also clearly modelled from Adam Driver’s sulky Star Wars character, Hazelwood tried to make him a little bit different and it just didn’t work. The end result was a really bland and confusing male lead. At times, when Hazelwood leaned into his Ren quirks, he was charming. Most of the time, he had a personality of a cardboard box.

The writing in Love on the Brain also felt really juvenile compared to The Love Hypothesis. Credit where credit is due to Hazelwood, she’s found her niche in building a STEM-focused, tropes galore romcom off the back of Star Wars and she’s sticking with it. For me, she was just trying too hard this time around. It was as if Hazelwood had a checklist of all the romcom cliches and references she wanted to hit in Love on the Brain and was just working her way through them as she went along.

The endless Star Wars references are whatever – I expect that from Hazelwood. What was really grating, however, was Bee’s narration. The quirkiness and banter are SO forced. Bee isn’t even believable as real adult person, let alone a respected neuroscientist. Not a second goes by without some STEM-related dad joke or sardonic STEM quip. We get it, it’s a STEM romcom.

Don’t even get me started on the endless chapters and paragraphs dedicated to Bee’s obsession with Marie Curie. It was cute at the start, but had the opposite effect of what I assume Hazelwood was intending which was to get people appreciating Marie Curie. After reading, I honestly never want to hear the name Marie Curie again.

The romance itself is drier than a packet of crackers. A lot of misunderstandings and drawn out pining that could have been solved by this simple thing called communication. I get that they’re ~awkward~ scientists but they’re not toddlers.

Speaking of which, I’m TIRED of the fetishisation of small, petite women as helpless and child-like in Hazelwood’s writing. Look, I’m really, really short and while it’s nice to be represented in romcoms, there’s something odd and uncomfortable about how Hazelwood portrays short, petite women as infantile. Bee gets wildly upset over doughnuts, has a total emotional breakdown over roadkill and talks like your quirky 14 year old sister on TikTok but then Hazelwood loves to describe all the six ways from Sunday that Levi bends tiny body in her bedroom. It wasn’t so bad with The Love Hypothesis, but Bee in Love on the Brain is half infant child, half sexy girlboss STEMinist. It’s off-putting and weird. Even more so when you remember that The Love Hypothesis stemmed from Reylo fanfiction and Daisy Ridley is about 5’7 so not that short and tiny at all and was then shrunken in the wash by Hazelwood to emphasise Adam ‘s hugeness.

It would be criminal if I didn’t touch upon that ending. What the hell was that? The last fifty or so pages of Love on the Brain goes entirely off the rails – not that it had much sanity at the start. While it was obvious that someone was tampering with Bee and Levi’s project, Hazelwood didn’t really utilise this subplot throughout the novel even though it was obvious it was happening and who was behind it. Hence, my confusion when we get to the last few pages and Hazelwood hits us with Bee being held at gunpoint in some sort of Scooby Doo ‘I would have gotten away with it, if it weren’t for you meddling kids’ villain plot twist. The rushed hostage situation thrown in at the end was just peak comedy. The worst bit? I don’t think it was meant to be funny.

All in all, Love on the Brain was a juvenile mess. A total disappointment.