It’s not hard to see why King is heralded by many as a great suspense and thriller story-teller.

Life can turn on a dime—or stumble into the extraordinary, as it does for Jake Epping, a high school English teacher in Lisbon Falls, Maine.

Jake is blown away…but an even more bizarre secret comes to light when Jake’s friend Al, owner of the local diner, enlists Jake to take over the mission that has become his obsession—to prevent the Kennedy assassination. How? By stepping through a portal in the diner’s storeroom, and into the era of Ike and Elvis, of big American cars, sock hops, and cigarette smoke…

Finding himself in warmhearted Jodie, Texas, Jake begins a new life. But all turns in the road lead to a troubled loner named Lee Harvey Oswald. The course of history is about to be rewritten…and become heart-stoppingly suspenseful. 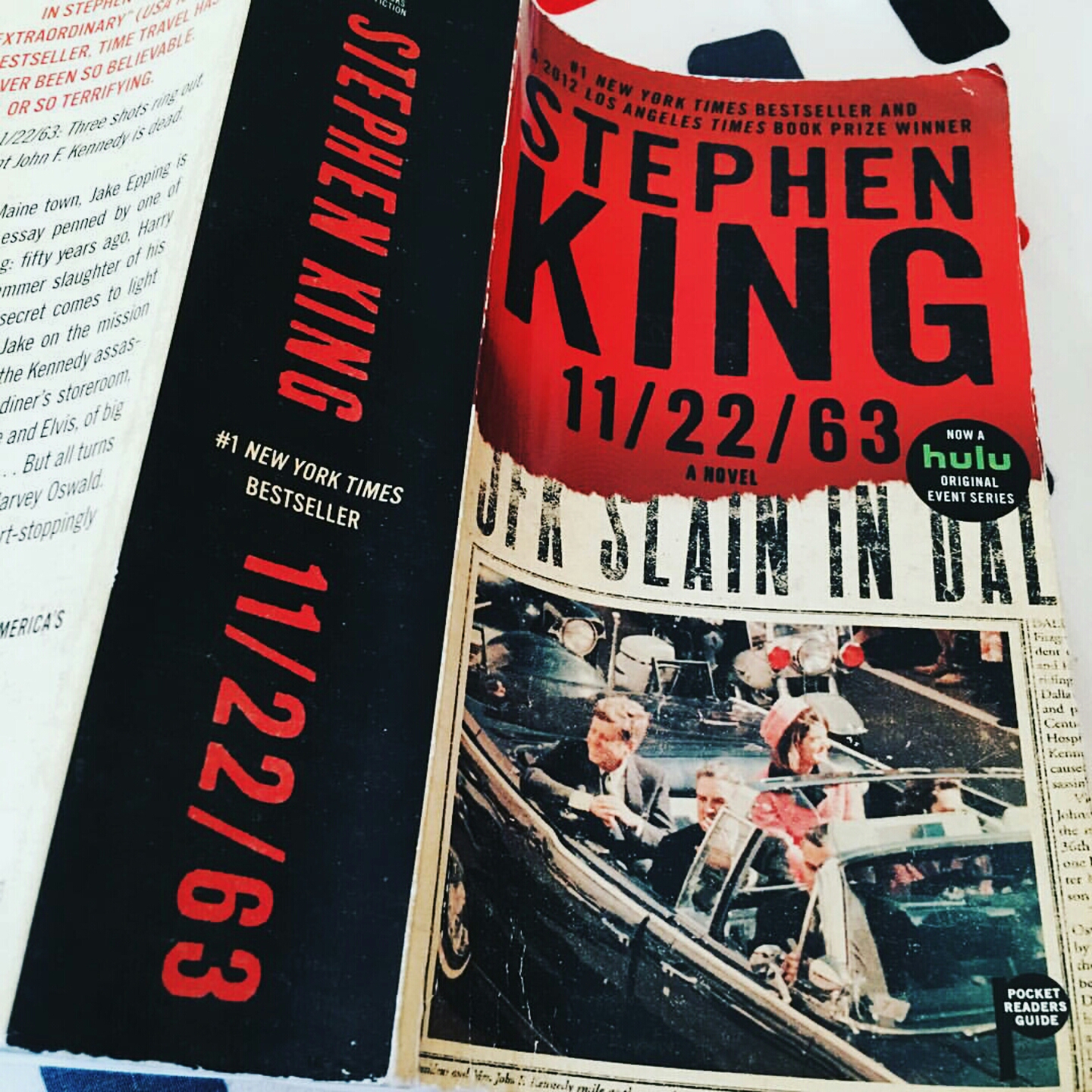 FOR A MOMENT EVERYTHING WAS CLEAR, AND WHEN THAT HAPPENS YOU SEE THAT THE WORLD IS BARELY THERE AT ALL. DON’T WE ALL SECRETLY KNOW THIS? IT’S A PERFECTLY BALANCED MECHANISM OF SHOUTS AND ECHOES PRETENDING TO BE WHEELS AND COGS, A DREAM CLOCK CHIMING BENEATH A MYSTERY-GLASS WE CALL LIFE. BEHIND IT? BELOW IT AND AROUND IT? CHAOS, STORMS. MEN WITH HAMMERS, MEN WITH KNIVES, MEN WITH GUNS. WOMEN WHO TWIST WHAT THEY CANNOT DOMINATE AND BELITTLE WHAT THEY CANNOT UNDERSTAND. A UNIVERSE OF HORROR AND LOSS SURROUNDING A SINGLE LIGHTED STAGE WHERE MORTALS DANCE IN DEFIANCE OF THE DARK.

Tears shed at the ending: Countless.

Gosh, what a ride.

As someone completely fresh to the story-telling of Stephen King, in my eyes, he had a tough job to do. Not only did he have to live up to all the expectations set by the rave reviews I’d seen on GoodReads, but as a girl from Blighty – whose history lessons have mainly revolved around British and German history – King also had to educate me and keep me up to speed with the goings on in America at that time.

Now, I was aware of the assassination of Kennedy, but having been born in 1998 and not exposed to a lot of American history, I had been concerned that I may I’d struggle to keep up. When you add in time-travel, it just sounded oh so chaotic! However, King’s execution of the novel and the way historical facts were weaved in and introduced was faultless.

I think I’m stating the obvious when I say that 11.22.63 is a thought provoking novel. Almost instantly after Al introduces Jake to the ‘rabbit hole’ that can transport him back into the past, we begin to ponder ‘what if?’ What if we could go through a portal into the past? Would we try to change history and right the wrongs? And what would happen if we did?

King’s story portrays an exceptionally realistic look at both ends of the rabbit hole. His compelling and charming, but brutally honest, look at life in the 50s and 60s is easy to lose yourself in. Yet, it’s the characters in this book that really sealed the deal for me.

I had a real soft spot for Jake from the get-go and he truly is one of the good guys. When Sadie’s ex husband resurfaces and slashes up her face, my heart melted at how Jake stood by her. This made it all the more harder at the end when Sadie ends up getting killed in Jake’s final showdown with Lee Harvey Oswald, thus prompting Jake to go back and undo his entire romance with Sadie and focus solely on stopping the assassination.

In a rather heart wrenching ending, Jake goes to see an 80-year-old Sadie who is being honoured by the town with a party. This version of Sadie has no recollection of Jake, but as they share a dance she begins to experience a form of ‘deja-vu’ and it’s just so sad! I think it was that moment that definitely solidified my love for this novel and while I have yet to watch the Hulu series based on the book, I have seen a clip taken from Sadie and Jake’s dance at the ending and boy, did I bawl my eyes out! For those interested, you can watch it here.

I liked how I never knew what to expect from 11.22.63 and how King constantly threw in curveballs to keep the lengthy story exciting. However, I don’t know if I’ll be picking up any Stephen King novels in the future. 11.22.63 was just such an amazing novel and a rather engrossing introduction into King’s writing. I am aware that King is predominantly a horror and supernatural writer and while I’m all about that genre, I don’t know if I could battle another long book any time soon. I did look into It in the hopes of reading it before the new film adaptation hits cinemas, but I saw the novel in all it’s 1,138 page glory in Waterstones and almost fainted. So, I think I’ll be giving that one a miss for now.

Yet, while there might not be another Stephen King review from me in the foreseeable future, I cannot recommend 11.22.63 enough. It was mind-blowing!